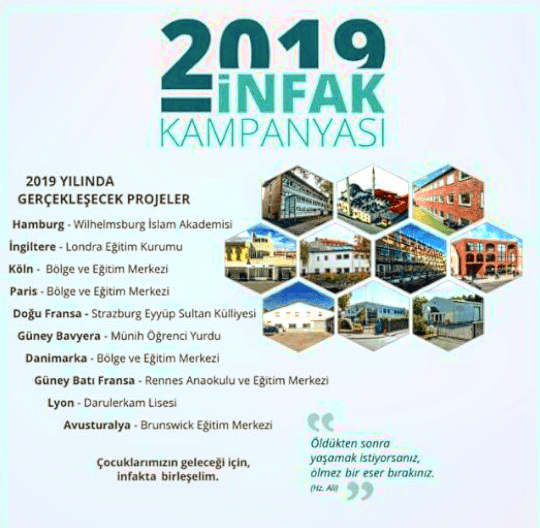 Jazakallah Khairan all those who took part in the 2019 INFAK campaign. You are now a part of this unique and beautiful Sadaqah Jariyah project run by the ICMG.
This multiple building project designed to expand and aid the growth of Islam in Europe by investing in the development and construction of Europe’s biggest Masjid and Islamic education institutions and dorms around the continent, has now stopped collecting funds.
Buildings will include :

Abu Hurairah (May Allah be pleased with him) reported:
The Messenger of Allah (ﷺ) said, “When a man dies, his deeds come to an end except for three things: Sadaqah Jariyah (ceaseless charity); a knowledge which is beneficial, or a virtuous descendant who prays for him (for the deceased).”
Sahih Muslim.
Uthman bin Affan RA narrated that he heard Allah’s Messenger ﷺ say: “Whoever builds a Masjid for (the sake of) Allah, then Allah will build a similar house for him in Paradise.”
Grade : Sahih – ref. Jami` at-Tirmidhi 318
Allah says:
“And who is better in speech than one who invites to Allah and does righteousness and says, “Indeed, I am of the Muslims.”
Quran 41:33