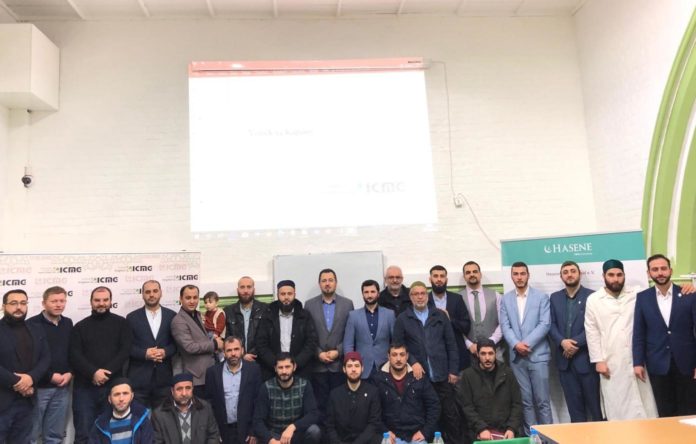 ICMG UK unite at Peckham Mosque to report each departments progress over the last 6 months and to revise strategy for the upcoming year. Reports show that each department has been performing to excellent standards with some highly satisfactory personal performances so far this year. Alhamdulillah.
ICMG will increase it’s effort in the upcoming year to achieve an even greater standard of performance. Attendees were the Brighton, Margate, London & Peckham committees, along with the head of each department of ICMG UK and also the youth & women’s department.
Talks were made firstly by Ubeyde Bilaloglu; Chairman of ICMG UK who firstly thanked everybody in attendance then followed by saying “your efforts are truly appreciated, we have done really well so far, but we will not rest now on our achievements, we will aim even higher, and I believe in all of you.”
Head of Hajj and Umrah Mustafa Kayitsiz , Head of Knowledge and Fatwa of IGMG Koln Ali Bozkurt, Adem Ozdemir, Head of Hasene & Bilal Hoca of Peckham Masjid also gave talks. Mash’allah.

Ali Bozkurt of IGMG hands Bilal Hoca of Peckham Masjid a token of appreciation for all their efforts namely their Zakat al Fitr Campaign.